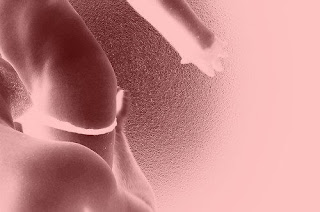 “You’re playing with me!” he declared sitting back from his books and folding his arms as if he’d figured out the meaning of life.
I raised a brow but didn’t bother to look over at where he sat one table over in the second level of the university library.
“You’ve been sitting there looking all studious for nearly two hours, but for the last hour you’ve squirmed, moaned, bitten your lip, and slowly hiked your skirt up till I can see the crutch of your knickers.”
He pushed back his chair, stood and took the two steps to my table before leaning over and placing his elbows on the table in front of me to look at me eye to eye.
“You need to clear your head or you aren’t going to absorb anything?”
I gave him a look of exasperation, slammed the text book shut and rose to re-enter the stacks and find another reference for my report. My short flowing skirt fell naturally back into place as I walked away and I heard a rumble of appreciation behind me at the way my hips swayed in my natural gait.
I scanned the shelves, found the number reference on the upper shelves but as I reached to collect the book I wanted hands slid up my outer thigh capturing the sides of my panties and tugging them down over my arse.
“Wha…?”
“Shh” he scolded from behind as he knelt and lifted my left leg so my foot rested on the edge of the first shelf.
The shift of leg exposed the heat of my sex and the first brush of his tongue against my labia made me choke on the moan that nearly erupted from my throat.
He licked tenderly, almost tentatively till my lips parted and his mouth closed over my swollen clitoris. I gripped the shelf in front of me, eyes wide and panting, grinding my hips against his face with need.
He chuckled and looked up at me from between my legs.
“Shh or you’re going to get us caught” he laughed.
It was late; we were two of the very few probably still studying at this hour so the chances were sparse, but still…
I bit my lip, closed my eyes as his fingers thrust into me, seeking that spongy pleasure centre that all women come undone from. He was right. I’d been sitting there trying to concentrate on my studies but all I’d been able to do was study his broad shoulders, his strong jaw line which was at odds with those soft, plump lips, lips now sucking my nectar as it spilled down over his thrusting fingers and onto his chin.
My cunt started to clench around his fingers; his mouth and hands disappeared. I looked around shocked and disappointed only to have him push me hard against the stacks and thrust his over engorged, already throbbing cock into my flooding heat.
His thrusts were strong and vicious as his hands gripped my hips bruising hard. He pressed his mouth to my shoulder and bit me through the material of my top as one of his hands slipped beneath and pinched my nipple hard.
My orgasm came from nowhere, ripped from deep within me with nearly no warning. His hand on my hip was suddenly over my mouth as I screamed at the pleasure and pain of it. He swelled even more within me and then stifled his own moan as he exploded inside me pushing my already mind blowing orgasm into a state of ecstasy.
He slowed and withdrew from me gently, turning me to him for a long, deep kiss.
“Fuck that was hot” he murmured to my lips as he tucked himself away.
I nodded, still breathing too heavy to talk. I’d never been fucked like that before; never been bitten, pinched or pommelled.
“You’re on the pill right?” he asked warily as he did the honours of righting my panties.
‘Now you ask?’ I think, but merely nod again.
He lets out a small sigh of relief as a smile spreads across his face.
“Well my heads clear, how about yours?”
He laughed; pulling down the book I’d been reaching for and handing it to me before he walked back to his study table.
I watched him walk away, study the last thing on my mind now as I whispered “Do that to me again and again, please!”