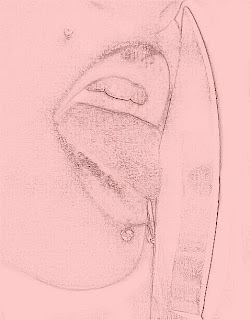 Just one slice, one slice won’t do her any harm. It would satisfy her craving, her need, and her desire.
No one could understand her obsession, they weren’t her. So she kept it to herself, dared not reveal that hunger that always gnawed at her insides, made her wanton with need. She’d press her thighs together tight when her naughty thoughts left her panties damp, her cunt itching to have a thick, hard, cock forcing her open, balls slapping against her wet, heated flesh with each furious thrust of hips.
She could almost taste it on her lips as she held the knife poised to make that first slice. A moan escaped her and she squirmed in readiness as just the imagined ecstasy of her deviance enfolded her. She pressed the knife down, felt the resistance to the blade and then the give as the sharp edge cut through and the rich sauce oozed out around the silver metal.
The orgasm hit her like a wrecking ball, forcing the air from her lungs, her head thrown back in rapture as the blade cluttered to the kitchen floor.
Just one slice and no one need ever know.